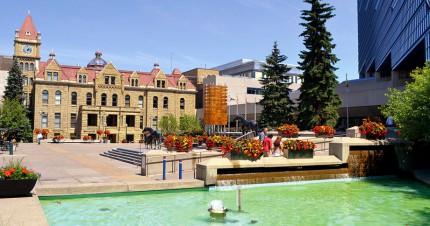 Over the past couple of years, Calgary has earned the honor of becoming one of the fastest developing cities in North America. This Canadian city has everything that other major cities offer, but the people of Calgary have kept their low-stress mentality, which makes the pace of the city much calmer than what would be expected. Even though the city has so much to offer, according to our former students, the cost of living is relatively low.

Since the 1988 Winter Olympic Games were held here, the city has become a meeting point for athletes. Calgary embraces this interest and encourages athletes to come and stay in the city while preparing and practicing for snow related sports.

Just outside of the city, about 45 minutes away, Banff National Park and Lake Louise can be found. These natural attractions are well-known for being the most magnificent sites of the Alberta province. Keeping with the natural atmosphere, each year Calgary hosts the “Calgary Stampede”. This festival allows for the ‘city folk’ in get in-touch with their old western -cowboy- spirit. The festival has become so popular that it now attracts visitors from all around the world!

During your English language course you should definitely take the time to discover more of Calgary, because this city offers something for everyone. Do you love nature? Then go to the foot of the Rocky Mountains or the famous Calgary Zoo. If you are interested in art and culture, you can visit the large selection of galleries and museums.

Book one of fantastic English courses in Calgary and discover the home of the 1988 Winter Olympic Games. Ever since the oil boom in the early 1900s, Calgary has become one of Canada’s most important cities where a mix of different nationalities makes it a multicultural melting pot that is an ideal location for English study abroad programs.

Why take an English course in Calgary?

Study abroad programs in Calgary are particularly special experiences: you have the chance to learn English from native speaking teachers and also discover one of the most exciting cities in the world. Need a break from your sightseeing tour in the modern city? How about a coffee to take away on the foot of the Rocky Mountains? Within just a few minutes you can be back amongst the hustle and bustle of the lively Calgary streets. An English language course in Calgary is an investment in your future, and taking one would give you the opportunity to visit unique places, gain useful experiences and create new friendships.